And the entire third week of the challenge has proved to be very difficult as a result.

It wasn’t the cravings or any feelings of deprivation. But I was uninspired in the kitchen, and as a result, my execution of our carefully crafted meal plan was mediocre.

In addition, I experienced a number of other challenges that made the week even more daunting.

“Curse you evil refrigerator. You have plotted against me and frozen all my fresh produce AND leftovers!”

Every night this past week.

And during the daytime, we’ve been running around like crazy people, trying to juggle kids who are out of school while managing our own schedules that were built upon the foundation that our kids were still in school.

So in order to avoid eating off plan, we spent the week eating extremely boring meals like grilled chicken with salad, grilled chicken with steamed vegetables, and eggs with … nothing. (Chickens and I may have to part ways when this is all over because I think I’m growing feathers, and I’m pretty sure I heard Kory “cluck” during the night.)

We also ate out a few times, which was even worse because we were in situations where the choices were extremely limited. On one such occasion, I paid $8 for a chicken sandwich, that after being “Whole30-ized,” was a chicken breast, drizzled with spicy mustard and pico de gallo, served with a big ole’ sack of NOTHING ELSE.

Because we were at a hamburger joint that had nothing on the menu I could eat. (They didn’t even have an avocado. What kind of burger joint doesn’t have an avocado these days? Grrrrrrr. But I wasn’t bitter at all while my three kids devoured their grilled cheese sandwiches (on Texas toast, of course) and sweet potato fries.)

I talked with several friends who experienced a similar third week slump during Whole30. And having punched through it, they blamed it on “cooking burnout” too. Because cooking three meals per day, 7 days per week is a significant commitment. And it creates a lot of mess that has to be cleaned up. So at least I’m not alone in my burnout.

But we can’t live in this place and expect to kill the Whole30 Challenge.

Kory frequently preaches about the fact that action often precedes belief. Sometimes we have to act our way into a new way of thinking. And I think if that’s true in any aspect of life, it’s certainly true in the realm of a path to better nutrition.

I didn’t sign up for the Whole30 Challenge because the idea of it filled my belly with warm fuzzies.

I did it because I felt that it was time to take another step in the healthier eating journey we’ve been on for the last two years. Because God gave me only one physical body. And as a steward of that gift, I need to take care of it.

So to punch through the third week slump, I set a realistic goal:

To meal plan five meals I could get really excited about eating, three of which had to be new. Then commit to cook them, no matter how I felt about being in the kitchen. I had four wins. One fail. Not bad for a woman clawing her way out of a slump!

Here’s what I came up with: 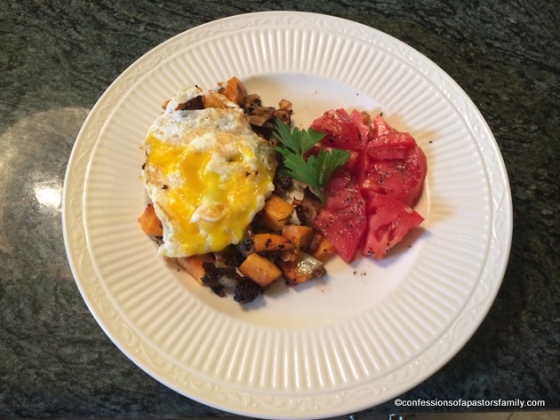 I found this recipe over at A Beautiful Mess and have been holding onto it for a rainy day. The Third Week Slump was full of rainy days (literally and figuratively), so as I meal planned Week Four, I felt like it was time to execute on this beauty. I’m so glad I did.

Two sweet potatoes proved to be enough for two meals for Kory and me, so this recipe provided 4 breakfast servings (with fresh eggs made at each sitting). 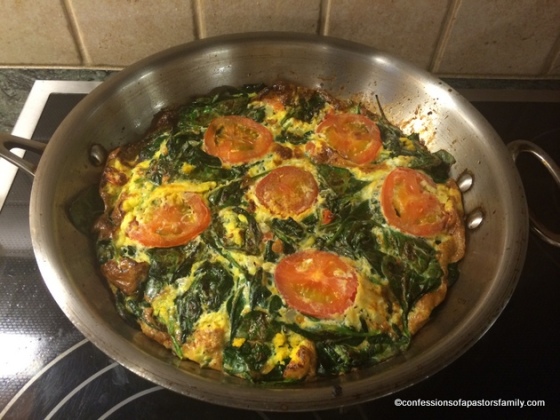 At the suggestion of another Whole30 enthusiast I’ve met online, I pulled this recipe out of The Whole30 book to help address the need for some variety in the meals we’re eating “on the run”. Because a week without a grilled chicken salad would NOT kill me.

I was extra-incentivized to not only plan this meal, but also prepare it, because I’ve wanted to make a frittata for a long time. I haven’t done it because I’ve been afraid it would be too hard and wouldn’t turn out, but her assurance that this was easy peasy lemon squeezy gave me all the confidence I needed.

So I made this frittata for Sunday morning breakfast. A great way to send Kory into the pulpit to preach, don’t you think?

And I used the leftovers as quick meals throughout the week. (Think frittata, some asparagus, and a small side salad.) This worked perfectly to provide a nice alternative to grilled chicken salad while on the run!

I found a similar version of this recipe to share with you here.

So we’ve been missing red sauce Italian dishes around here just a little bit these last few weeks. They’re a mid-week staple, and the kids love them. So when one of my Whole30 partners-in-crime shared this recipe with me over the fabulous Paprika app, I was smitten.

Friends, this was fantastic, super easy, and family friendly.

The biggest score from this recipe is that it includes an entire spaghetti squash, and my kids mistook it for angel hair pasta (except for my oldest son who helped me cook dinner and was sworn to secrecy about the ingredients until after everyone agreed they liked it). Click here for the recipe we used as our base, but my friend’s tweaks resulted in this:

1 pound Italian sausage (I had to make my own to remain compliant; buy one pound ground pork and use Italian seasoning)

2 cups marinara sauce (I used Raos, of course, which by the way, Amazon Prime Now will deliver in two hours to your doorstep!)

Salt and pepper, to taste

(optional: add anything you like with pizza: veggies, basil, etc.)

Preheat oven to 400 degrees. Cut spaghetti squash in half lengthwise. Place spaghetti squash cut side down on a baking sheet and bake for 20-25 minutes or until the skin of the squash gives when you press on it. Then reduce oven to 350. Once squash is done cooking, remove threads and place in a 9×13 greased baking dish.

Place a large pan over medium heat. Cook onion and garlic about 5 minutes. Add italian sausage. Cook until pink no longer remains in the sausage and it is broken up into pieces. Add marinara sauce, dried basil (I used fresh) and salt and pepper to the pan and mix well. Add sausage mixture to the baking dish and mix well with spaghetti squash and threads. Add whisked eggs to the baking dish and mix everything together until you can no longer see the eggs. Place in the oven and bake for 1 hour or until the top of the mixture forms a slight crust that doesn’t give when you press on it in the middle of the dish (for me, this was 50 minutes). Let is rest 5 minutes before serving.

I served this with asparagus salad.

This recipe may be in the weekly rotation for a while. It was THAT GOOD.

This might be the best pork tenderloin I’ve ever made. And it was so simple, Whole30 compliant with no tweaking, and made little mess in my kitchen.

Wins all the way around!

You can find the recipe here.

I served this with roasted red potatoes and asparagus which I made in one cookie sheet to reduce the mess. (Preheat oven to 400 degrees, drizzle potatoes in EVOO, salt, pepper, and cumin, drizzle asparagus in EVOO, salt, and pepper, roast for 20-25 minutes or until potatoes are fork tender.)

It’s only Wednesday of Week Four, and I do feel like we’ve pulled ourselves out of the slump. I still have one meal up my sleeve that I’m really excited about, which we will take a whack at tomorrow night. Then it’s another wedding weekend for Kory and me.

Before I go, I should also mention that during the Week Three slump, I experienced some dizziness. I did some research on this issue and discovered it’s common among Whole30 participants and usually results from dehydration or insufficient carbohydrates or sodium in the diet. I intentionally increased my intake of all three things and the dizziness went away. Click here for the link to the Whole9 Life forum I visited to get these answers!