We still keep a baby monitor in our two year old’s room.  It’s there because he’s not to be trusted.  He’s known for climbing out of his bed at all hours of the night.  He enjoys creating murals with Boudreaux’s Butt Paste on his furniture and walls.  He likes to wake his sister and brother in the wee hours of the morning.  And he climbs.  Well, he climbs just about everything.  So we’re not keeping a baby monitor in his room to hear his cries in the middle of the night.  We’re spying on him.

This is a new world order for us.  Our daughter and oldest son never strayed from their beds in the middle of the night.  They never used our walls or furniture as an art canvas.  And we never worried about one of them actually climbing the banister railing on the second floor of our home.  But we worry now.  And it’s is an up-at-dawn, all-day battle to keep our very busy youngest child safe and “in the funnel” as Gary Ezzo would say.

Don’t get me wrong.  He’s precious.  He’s charming.  He’s loving.  And he’s tons of fun.  We can’t imagine our family without him.

But when I share stories about our youngest’s latest shenanigans with our extended family, my mother-in-law looks me square in the eyes, laughs, and says, “I’m so sorry.”  So I guess our youngest gets his adventurous spirit from his father…I’m just sayin’.  (He gets most of his qualities from his father.  Especially his good ones.  So I’m not picking on Daddy.  I’m just being honest.)

During the night, we’ve learned to discern the noises associated with our son’s pre-escape strategic planning sessions.  So we decided to watch him over the baby monitor as soon as the next planning session began.

The James Bond-like night vision feature on our baby monitor allows us to watch him in the dark. You can see here that he’s engaged in preliminary surveillance as he debates whether to make a run for it!

And once he kicked one leg over the railing, I used the talk-back feature to correct him.

He let out a loud scream and dove back into his bed and under the covers.

But the next morning, when I went into his room to get him up, he began talking about the baby monitor.  He calls it the “modeemurder.”  He said, “Mommy, the modeemurder was talkin’ to me las’ night, and it scare me.  I don’ like the modeemurder.” 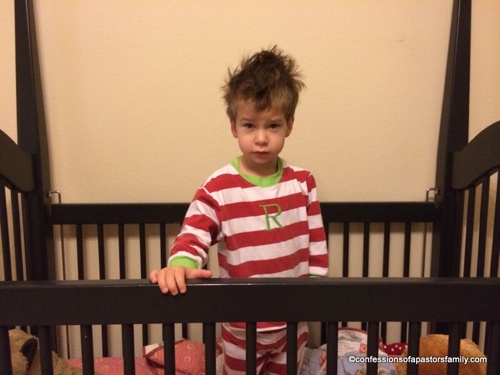 When we find that he’s actually stayed in his bed upon waking up in the morning, he gets lots of praise!

Well, obviously, my goal was not to scare him, but rather, to get him back into his bed.  So I brought the receiver up to his room and demonstrated that what he was hearing was just mommy’s voice.  We had some fun with it, and I thought that he understood.

The next night, the same thing happened.  The child kicked his leg over the railing of his crib, and mommy talked over the “modeemurder” to encourage him back into his bed.  Instead of diving back into the bed this time, though, he went forward with his escape, tore across his room in the dark, and shut himself into his closet.

When I realized he wasn’t going to come out on his own, I made the trip up our stairs to get him out of the closet and back into his bed.  When I opened the closet, he was standing inside in the dark, with a horrified look on his face.  He jumped when I opened the door.  I picked him up, calmed him down, and got him back to bed.

“This is your mommy.  There is nothing to be afraid of.  Get back in your bed.”

To no avail, one of two things would happen.  He would dive back into the bed, under the covers, and scream his head off.  Or he would tear across the bedroom and lock himself in the dark closet. 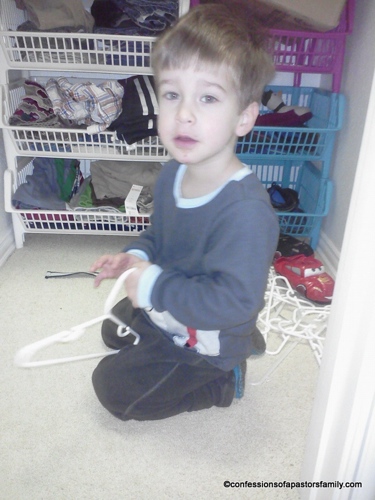 Every time.  No matter how many times I told him who I was.

Over a series of nights, though, we began to make some progress.  Something finally clicked, and he began to either recognize my voice over the baby monitor or, based on repeated experiences, he learned that nothing bad was going to happen when the “modeemurder” talked to him.  Either way, he gained understanding that there was nothing to fear.  Now, when I talk to him in the middle of the night, I hear only a soft “OK”.  And he stays in his bed.

In 1 Samuel 3, Samuel mistook God’s voice for that of Eli in the middle of the night.  Three times he made this mistake before Eli, the priest who was in charge of all worship in Israel, realized what was going on:

“A third time the Lord called Samuel. He got up, went to Eli, and said, ‘I’m here. You called me?’ Then Eli realized that it was the Lord who was calling the boy. So Eli said to Samuel, ‘Go and lie down. If he calls you, say, Speak, Lord. Your servant is listening.’ So Samuel went and lay down where he’d been. Then the Lord came and stood there, calling just as before, ‘Samuel, Samuel!’ Samuel said, ‘Speak. Your servant is listening.'” 1 Samuel 3:8-10.

Listening for God’s voice and responding to it with action are vital components to our relationship with God.  God doesn’t always use the sound of a human voice, but he speaks clearly through the scriptures.  God also speaks in unexpected places, through unexpected people, and in unexpected ways.  It would serve us well to be on high alert, listening for God to communicate with us, at all times.  So that when God speaks, we are prepared to listen and respond.

Are there places in your life where God is speaking to you?  Are you hearing him?  Are you saying, “Speak.  Your servant is listening.”?  Or are you hiding in the closet?